Help, Virus that turns itself off when task manager is opened 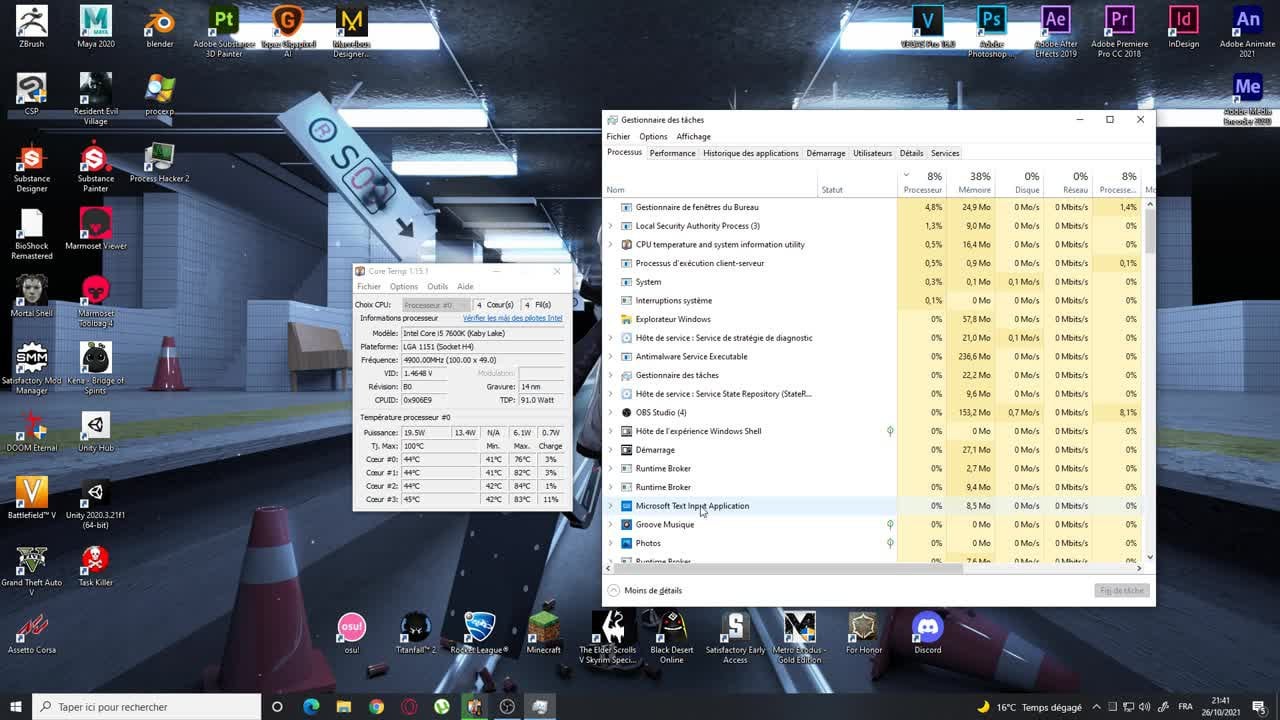 Ok something weird is going on. I recorded a (https://streamable.com/2d26ec) that somewhat sums up my problem, but if you can’t watch it I’ll explain it here:

So I noticed I was not getting usual performance while gaming so I opened up the task manager and couldn’t notice anything strange so I just switched back to my game and continued as if nothing happened. When I tried to search a bit further I noticed that what was happening was that I was having a nearly-constant 100% CPU spike, heating up my CPU beyond 85 °C despite it being watercooled and that everything was getting back to normal only while the task manager was opened (and it does the same with most of the task manager alternatives I could find). My obvious guess would be that there is a malware smart enough to hide itself which is doing some crypto mining stuff in the background but I may be wrong.

I didn’t really stress it out as it’s the type of thing that happens to everyone so I made a WinDefender check but nothing was showing up. I then downloaded Malwarebytes (which I saw as a pretty efficient tool) but again, a virus search says that everything is fine although it is not. ADW doesn’t find anything as well. I tried looking online but nothing solved my issue.

I tried to identify from where it was coming from to manually delete the thing, but the program being hidden in the TM makes this hard. So far I only noticed that there were two csrss.exe services set to priority 13 via msinfo (the virus keeps on running while msinfo is opened), at first I thought that one of them was the trojan but both are located in system32 so I guess I was wrong. I tried looking for a monitoring tool that could make a detailed performance log over a short period of time to see what program was using so much CPU but couldn’t find anything, if you guys know anything like that please share it. I made a safe boot and the CPU usage was back to normal so I do not think that it’s a windows related issue.

If you guys know any way to get rid of this thing without having to wipe out my whole computer I’m gladly listening.
Otherwise, I’m making backups of important files but it sucks to have to reset almost 5TB of data because of some stupid mining program.